Decadent chocolate caramel nut bars filled with gooey caramel and studded with crunchy pecans are sure to be a hit at your next party. All the flavor of a classic turtle with about 1/3 of the work!

I love a good bar cookie. Bar cookies already take out about half the work by not being individually scooped. We just throw the batter all in one pan and let the oven work it’s magic .

We cut down on our prep time even more by using semi prepared ingredients (cake mix and store-bought caramels) so these are the perfect dessert to bring to a Friday night gathering when you don’t have all day to make something fancy. (But they totally taste like you did). There is a reason this recipe has been a hit at midwestern potlucks for years.

I got this recipe from a friend’s mom who got it off the back of a can of evaporated milk many years ago. It’s been tweaked ever so slightly over the years, swapping out walnuts and adding pecans and adjusting the amount of milk (cans of evaporated milk are bigger these days).

This recipe calls for evaporated milk, but what the heck is it? Evaporated milk is canned milk where about 60% of the water has been removed. The resulting milk is a little bit thicker and creamier with a significantly longer shelf life than regular milk.

How is it different from sweetened condensed milk?

Sweetened condensed milk is milk where much of the water has been removed AND sugar has been added. It’s thick and slightly more yellow looking and super sweet. Kinda gross to consume straight out of the can, super awesome in certain desserts.

Sweetened condensed milk was actually the first canned milk to be released back in 1856. The idea was to create a milk product that would last longer than just a day or so. (Pasteurization wasn’t even discovered until 1862). The sugar was originally added to inhibit bacterial growth in the milk (kind of like the same reason we add sugar to jam).

What’s super delightful, is they both come in similarly sized cans and are typically together on the shelf at the store.

Oh shoot, I bought the wrong one, can I just interchange them?

Um, no. Using sweetened condensed milk where you just needed evaporated milk will make your dessert way too sweet.

What’s super delightful, is they both come in similarly sized cans and are typically together on the shelf at the store, so this is a super easy mistake to make.

If you messed up and bought the wrong one, you can use half and half as a substitute for your evaporated milk or you can make your own.

Hopefully you realize you bought the wrong one before you open it, but if you’re like me, you’ll just be staring at an open can of the wrong milk swearing in your head (or sometimes out loud).

Notes about these Caramel Nut Bars: 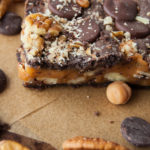 This recipe was adapted from a recipe I got from a friend’s mom who got it from the back of an evaporated milk can a long time ago. If you or the people you’re making it for, don’t care for nuts, feel free to omit them or just put them on half the pan.

If you’re looking for other delicious bar cookie recipes, you might want to try these Kongo bars or maybe some peanut butter pizza.

For other recipes that include evaporated milk, check out these pale ale caramels.