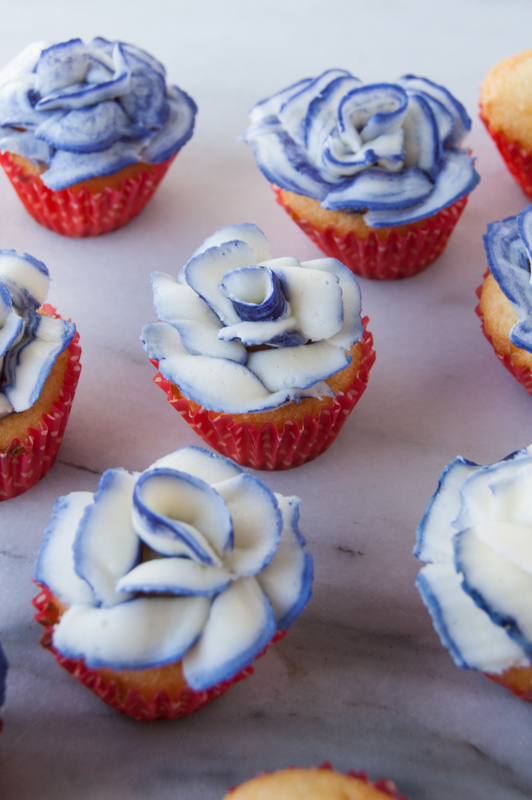 When I was a kid, on occasion, my mom would buy a cake from the lady down the road who decorated cakes. Usually it was a bigger celebration, like a baptism or anniversary or very occasionally a big birthday party. Her cakes were beautiful-covered in loads of buttercream roses. My sister and I would always vie for piece with the biggest rose. I always thought that when you could make a buttercream rose, you were a cake decorator.

Turns out, it’s one of the first things they teach you in the Wilton method classes after learning how to make your own frosting and frost your cake without getting 10,000 crumbs in the buttercream (still working on that one). Nonetheless, buttercream roses still can be showstoppers and reasonably impressive to people who don’t decorate cake. Also, a Wilton tip 104 rose fits perfectly on a mini cupcake.

Step 1: Fit the tip to your piping bag

Fit your piping bag with a Wilton tip 104 or any brand petal tip. There are multiple tips that will make roses. In the Wilton line, 102, 103, 104 and up will pipe roses. Basically, the tip looks like the one pictured above. Whatever number it is, that’s your rose tip. In the Wilton line, tip 102 is smaller than tip 104, so if you’re looking to make smaller roses, then choose that one. But I find that a 104 tip fits perfectly on the top of a mini cupcake. Fill your piping bag with frosting.

With the fat part of your piping tip towards the bottom, hold the bag at a roughly 30 degree angle while applying medium pressure on your piping bag, pipe a loop in the middle of your mini cupcake.