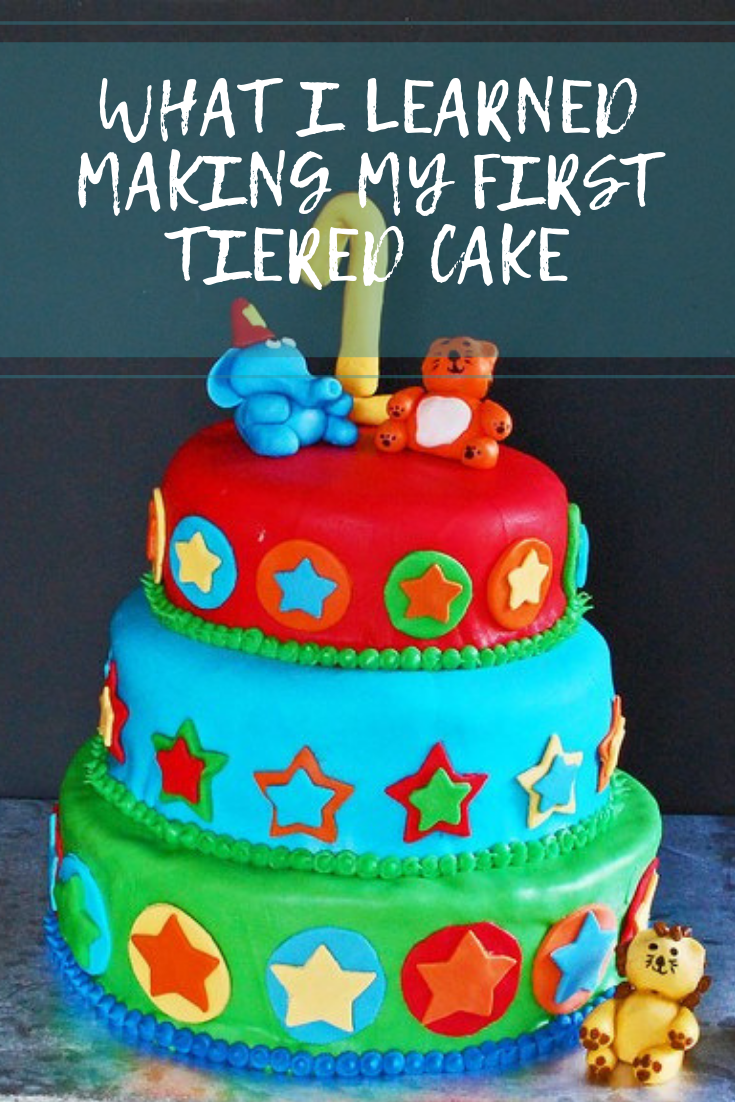 I learned that I need to allow the 12″ cake to cool for a considerable amount of time before turning it out of the pan, the first cake I made ended up in a million pieces on my counter because it was too hot and fell apart. I also learned that I could not make this chocolate cake recipe for a cake that large, I used cake mix instead. I had originally hoped that a from scratch cake would be more sturdy, but it was too heavy and that contributed to it falling apart.

For some reason I couldn’t decide what kind of fondant I wanted to use, and ended up with each tier having a different kind of fondant. The red is Fondarific, which was easy to use and tasted good, but is pretty expensive. The blue fondant was Wilton, my least favorite taste. I learned to use Wilton fondant in my class though, so I knew how it would act. Also, it’s reasonably priced for store bought fondant (especially with a 40% off Michael’s coupon). The green tier was homemade marshmallow fondant. Taste wise, this is far and away my favorite, however I have only made it a few times and the consistency was more difficult to work with. As you can see from the photos, the green homemade fondant also showed more lumps and bumps than the other two. I learned that if the budget allows, Fondarific is the way to go in the future, if not, I need to work out the kinks in my marshmallow fondant recipe.

The animals were all made from Wilton store bought fondant. The yellow number 1 was made of gumpaste (gumpaste will dry super hard so the number will stand up). The stand for the seal was made from melted green Candy Melts in a prep bowl, however it difficult to remove from the prep bowl. Next time I would probably make it out of fondant.

At the suggestion of Rose Levy Beranbaum in her classic book The Cake Bible, I sharpened a dowel rod and gently tapped it through the three layers before placing the animals on. This dowel rod made transport so much easier! I would recommend that trick to anyone, well anyone brave enough to hammer a dowl rod through your decorated cake…

I also made him a 6″ round smash cake with an elephant holding a candle on a ball. Did I take any photos? No, of course not. I was running late.

Even with all of the learning, the cake itself turned out ok. My sister was happy with it and that is all that I can ask for.