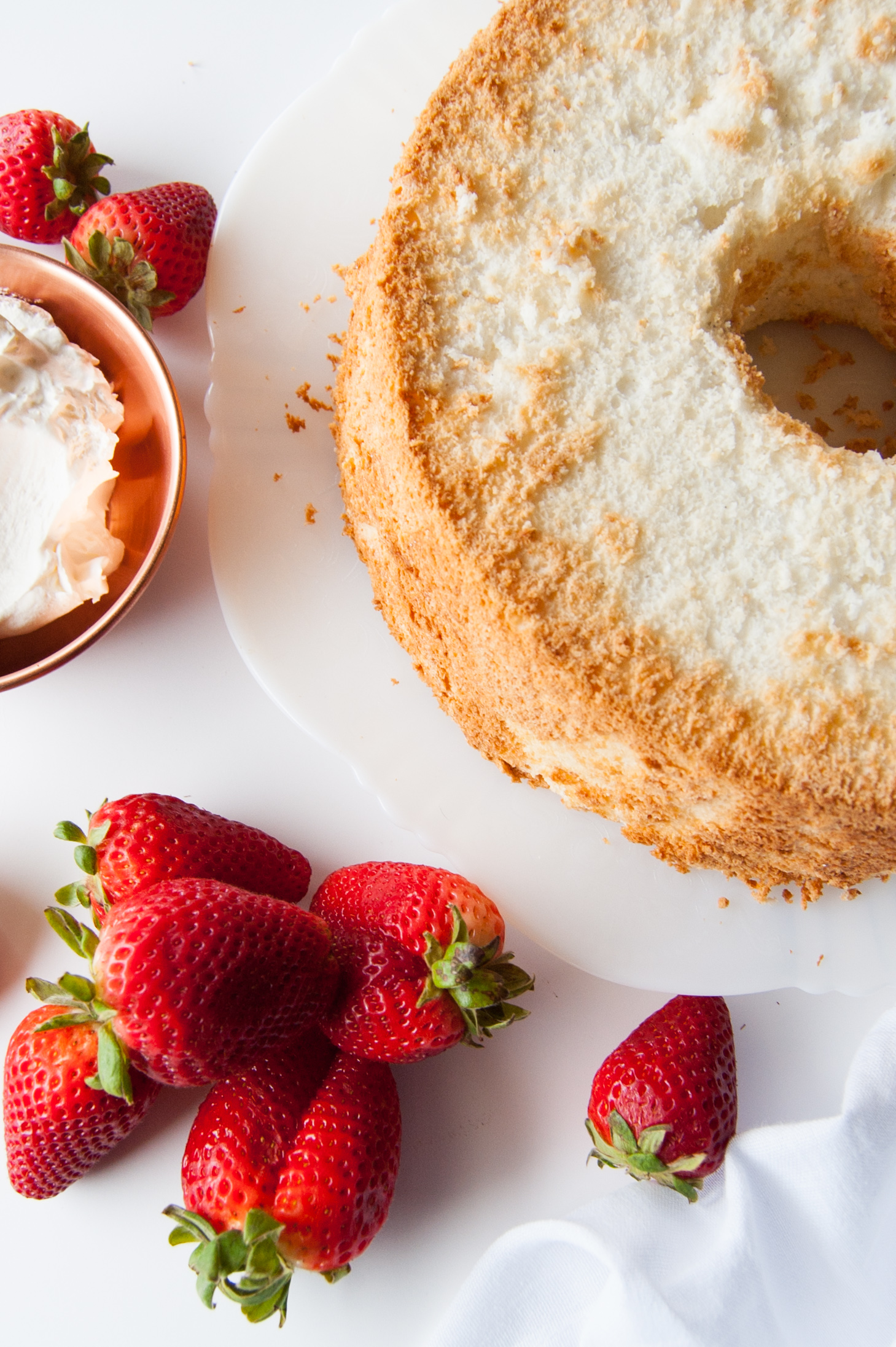 Light and fluffy angel food cake is the perfect summer dessert especially when topped with sweet strawberries and a dollop of whipped cream!

Angel food cake is absolutely, hands down, my favorite cake in the whole world.  It’s the cake that I always ask for as my birthday cake. It’s light and fluffy and perfect eaten smothered in whipped cream and strawberries or just plain standing over the sink to catch the crumbs.

Growing up, because we had chickens, we actually ate angel food cake fairly frequently.  My mother always said that fresh eggs made the best angel food cake.

These days I have to buy my eggs, but even store-bought eggs make some pretty nice angel food cake

3 Methods to Separate Your Eggs

This recipe calls for a dozen egg whites. That is a lot of eggs to separate. There are a bunch of different ways to separate your eggs. My particular favorite is using the handy little tool you see in the above photo. It came with a set of measuring cups I received as a gift and is probably the most useful little uni-tasker that I own. (If you’re looking for a more, uh, interesting egg separator check out this one or this one)(affiliate links).

However, I did not grow up with such a fancy gadget. I learned to separate eggs by cracking the egg in half and gently shuffling it back in forth into the different halves of the egg shell until the yolk separated from the white. Benefits of this method are that it’s free and you don’t have to spend 20 minutes rooting around in your drawer for your egg separator. Drawbacks are that it’s pretty easy to get one half of the shell that is bigger than the other and then everything gets tricky. Also, much easier to get bits of egg shell in your egg.

Some daring people choose this method of separating their eggs, but I personally don’t love that much egg on my hands. However, it is very quick and effective.

Use 3 Bowls To Separate Your Eggs

For this angel food cake recipe (and really any angel food cake recipe), there can be no traces of yolk in your whites. For a long time, I found this to be a struggle when I was separating my eggs. But then I realized that I was being an idiot by keeping my bowl of whites under each precarious yolk. I then learned that each time I plopped an egg white out, put it in another bowl so that on the last egg the yolk does not accidentally slip out and ruin a dozen egg whites.

What is Cream of Tarter?

This recipe calls for the help of an ingredient called cream of tarter. Cream of tarter’s actual name is tartaric acid. It is a white, powdery substance left in wine barrels during the wine making process. Why do we care about white powder leftover from wine making? Because it creates more stable air pockets in our egg whites which helps pump of the volume of our meringue which results in a taller, fluffier angel food cake.

What are stiff peaks?

The directions call for us to beat our egg whites until stiff peaks form, but what the heck does that even mean?

It simply means that you beat the meringue until it stands up on it’s own and doesn’t flop over or drop back into the bowl. We want stiff peaks in order to provide structure and height to the cake since we aren’t relying on chemical leaveners to do that for us.

Why do we flip it over as soon it comes out of the oven?

For most traditional cakes, we usually put the cake on the cooling rack for 15 minutes or so before flipping it out of the pan otherwise we have a big broken mess on our hands. So why do we flip this cake immediately? Because of it’s delicate structure, the cake will crush itself when it’s still warm. Flipping it over helps set everything as it cools.

If you’d like to practice your egg whipping skills, you might want to try making these lemon pavlovas or maybe some mini lemon meringue pies!