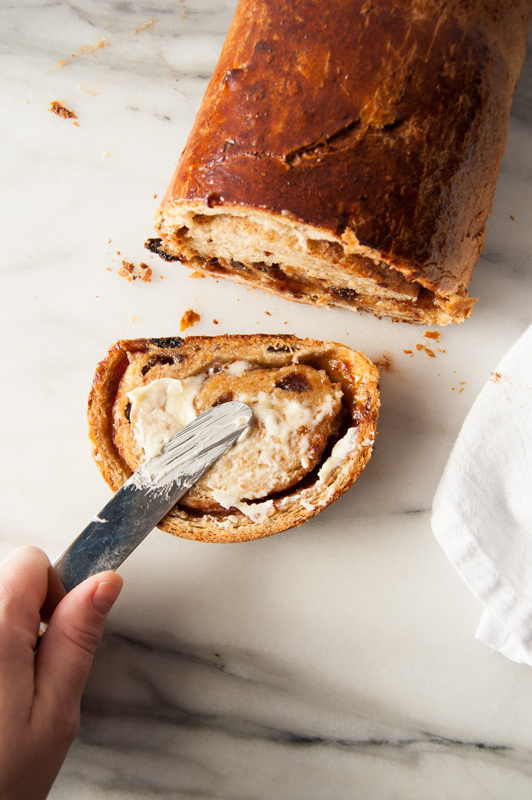 Cinnamon raisin bread is studded with plump raisins and swirls of cinnamon and sugar. It’s perfect slathered with salted butter for a quick breakfast!

What I love about cinnamon raisin bread is that it’s all the flavor of cinnamon rolls with less hassle. Plus, homemade bread is more fun to make, tastes better, and healthier for you than store bought bread. It’s the perfect thing for a snowy, cold, winter afternoon. You won’t be sorry you did.

Homemade bread is also a pretty cheap and easy way to try something new. If it totally flops, you’re only out a few dollars and some time in your day which isn’t too bad for an experiment. If you’re new to bread baking and you want an excellent free email guide on how to make better homemade bread, sign up below and I’ll send it to you!

How long is cinnamon raisin bread good for?

Homemade bread is best the day it’s eaten. Wrapped tightly in plastic wrap or a Ziploc bag, homemade bread stays fresh 3-4 days. After that it starts to get a little bit stale. That’s when it can really benefit from a little time in the toaster oven. Because there are no preservatives, homemade bread will start to mold usually after 5-6 days. You can keep it in the fridge to slow the molding process down and you might get closer to a week.

Because this recipe makes two loaves and homemade bread doesn’t last very long, I typically give away one of my loaves. Everybody loves homemade bread and that way it doesn’t got to waste.

What can I eat with cinnamon raisin bread?

I personally love my cinnamon raisin bread on it’s own, slathered with some salted butter. I think it really shines when accompanied by some scrambled eggs or some hash browns for a nice sweet and salty combination.

It also makes a lovely peanut butter (or sunflower seed butter) sandwich, since the outside is already sweet, you don’t even need any jelly.

Below is a quick video on how I roll my loaf to so that it easily fits into my bread pan but gets all that cinnamon swirl goodness!

For the bread dough

Notes: I use instant yeast in my recipe. If you choose to use active dry yeast, you will need to proof it in warm water and consequently you will have more liquid in your recipe that I typically do and you will probably need to increase your flour. Also, I find it helpful to place a layer of parchment paper on the bottom of my loaf pans before putting the dough in. I find that even if I have a good seal, frequently some cinnamon and sugar leaks out of the bread and I have a sticky mess on my hands without the parchment paper. I sometimes use an egg wash on top of this bread too. It makes the top nice and brown and shiny. It also will make it burn like crazy if you do not pay attention.