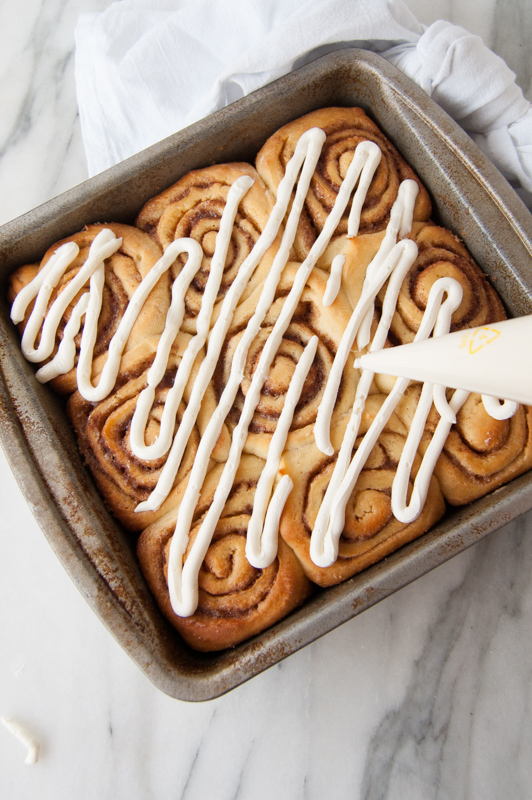 Cinnamon rolls are the perfect breakfast treat. Straightforward yeast dough filled to the brim with sugar and cinnamon and topped with your favorite icing!

Homemade cinnamon rolls are hands down my favorite breakfast food.  My mom used to only make them for special occasions, like Christmas, and I would anticipate them for weeks.  I love these cinnamon rolls plain, warm, with icing, a few days old, any which way.  The basic sweet dough that makes these delicious lovelies also makes a fantastic clover dinner roll.

Does it matter what kind of yeast I use?

I personally prefer to use instant yeast but it doesn’t matter if you use instant or active dry yeast. Whichever you are more comfortable with is fine.

What’s the difference between the two?

Active dry yeast is yeast that needs to be “proofed” before using.  Proofing just means to wake up the yeast by placing them in a small amount of warm water for several minutes prior to including it in your bread recipe.   Why?  According to Peter Reinhart’s The Bread Baker’s Apprentice, it is because, “active dry yeast is grown on larger grains of nutrient that have to be dissolved in warm water.”

Instant yeast can be added directly to a bread recipe.  There is no need to proof the yeast.    Why?  Again, according to Peter Reinhart, “Instant yeast comes on such small grains that it instantly hydrates when the dough hydrates so can be added directly to the flour.”  It is often called quick rise yeast or bread machine yeast.  Because of the way it is processed,  you need to use slightly less instant yeast than active dry yeast in a recipe, about 25 percent less.

How do you now when the cinnamon rolls are done rising?

For the first rise: when the dough has doubled in size and when you gently poke the dough it leaves a dent and doesn’t immediately pop back. This should take 45 minutes to 1 hour, depending on the temperature of your kitchen.

For the second rise: when the rolls have grown close to each other and when you gently poke the dough and it leaves a bit of a dent. This should take about 45 minutes, depending on the temperature of your kitchen.

What kind of frosting should I use?

My mom always made these with a simple frosting of 1 cup powdered sugar, 2 tablespoons milk, and 1 teaspoon vanilla extract. However, regular American buttercream is really nice drizzled on top and cream cheese buttercream is also an excellent choice. I like to drizzle my frosting on when the cinnamon rolls are still warm so that it sort of melts into the cinnamon roll, but waiting until they’re cool is also fine. 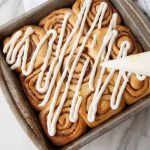