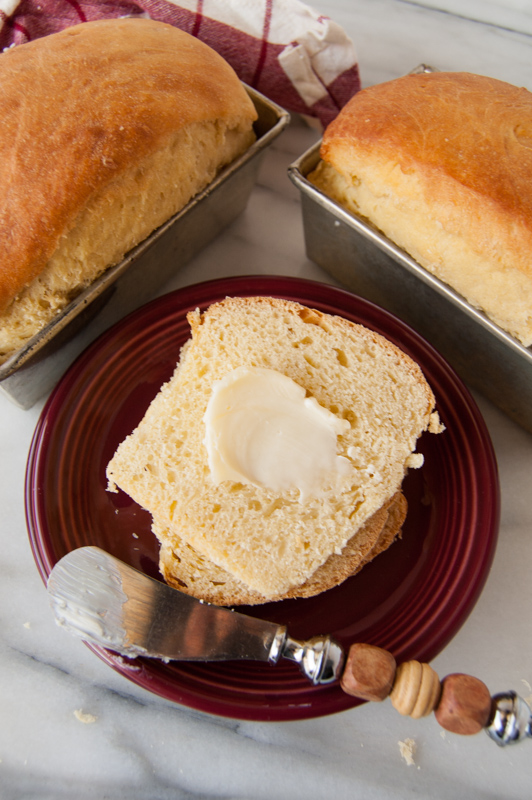 Homemade potato bread is an easy direct method bread made with all-purpose flour and leftover mashed potatoes. Slather it with some salted butter for the perfect afternoon treat.

My family has been making this bread recipe for years. Pretty much after any Sunday dinner we would whip up a batch using the leftover mashed potatoes. It was the first bread recipe I learned to make and the one I turn to most. It cuts up nicely to a slightly sweet sandwich bread but I think it really shines eaten on it’s own with some salted butter and maybe a little bit of jam.

What is direct method bread?

“Direct method bread” or the “straight dough method” is bread that can be made all in one day in just a few hours. There are lots of kinds of bread like sourdough or Italian bread that require a starter dough on the first day and the final dough on the second day. This is not that kind of bread. This is the kind of bread that you can decide that morning you’re making for dinner (or a snack) that night.

Can you use potato flakes in potato bread?

How do you make bread soft and fluffy?

It’s the gluten! Flour has two main proteins, gliadin and glutenin. These two proteins combine to form gluten when you add water to flour. Gluten is what provides structure and elasticity to dough. We want this in bread dough so our bread bakes up tall and is nice and chewy.

Another reason this bread is so soft and fluffy is because it’s considered an “enriched dough. Enriched bread dough is any dough that has “extras” like milk or eggs that soften the dough but contains less than 20% fat (doughs that contain more than 20% fat are considered “rich” doughs).

Can you use all-purpose flour in bread?

Of course! Bread flour has a little bit more gluten than all-purpose flour (11.5-13.5%) but for most homemade bread recipes (especially enriched ones) you won’t notice the difference. If you have the option, however, buy unbleached flour. Unbleached flour still contains beta-carotene and it adds to the flavor and smell of the finished bread.

What is the difference between active dry yeast and instant yeast?

Active dry yeast is yeast that needs to be “proofed” before using. Proofing just means to wake up the yeast by placing them in a small amount of warm water for several minutes prior to including it in your bread recipe. Why?  According to Peter Reinhart’s The Bread Baker’s Apprentice, it is because, “active dry yeast is grown on larger grains of nutrient that have to be dissolved in warm water.”

Instant yeast can be added directly to a bread recipe.  There is no need to proof the yeast.    Why?  Again, according to Peter Reinhart, “Instant yeast comes on such small grains that it instantly hydrates when the dough hydrates so can be added directly to the flour.”  It is often called quick rise yeast or bread machine yeast.  Because of the way it is processed,  you need to use slightly less instant yeast than active dry yeast in a recipe, about 25 percent less.

How do you know when your potato bread is ready to go into the oven?

When the bread dough rises just above the rim of the pan or when you poke the bread and it’s soft, without much give or spring back. Your finger will dent in the dough but not deflate the dough. In a kitchen about 70 degrees, this usually takes about an hour.

What type of bread pan should I use?

Use a metal bread pan for yeasted breads that require a pan.

Metal pans heat up more quickly so they are hot and ready at the right time to give your loaf just the right amount of lift (or oven spring) it needs. Metal also heats up quickly to contribute to the Maillard reaction (simple sugar+heat+dry=Maillard reaction) to make a nice brown flavorful crust.

How do I know when my bread is done baking?

It seems a little bit ticky to determine when your bread is done. My mom taught me to thump the top and see if it sounds hollow. This is an effective method but a little hard to learn. I typically take a toothpick and stick it in the side of my bread through to the middle and see if it comes out clean.

Once your loaves are out of the oven, allow them to cool for a couple minutes in the pan and then take them out of the pan to finish cooling. If you allow your bread to cool in the pan, you’ll get soggy bottoms and nobody likes that.

How long does potato bread last?

Potato bread lasts on the counter, wrapped up in plastic wrap for 3-4 days. There aren’t any preservatives so it will be more prone to mold and staleness. It will last probably a week in the refrigerator. You can freeze uncut loaves-simply wrap them well in plastic wrap and put them in a freezer bag or other freezer safe container. Remove from the freezer 2-3 hours before you want to eat it and let it stand at room temperature. 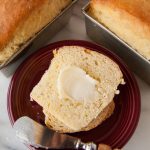 Can use 2/3 cup potato flakes instead of 1 cup mashed potatoes.

This bread is plenty good with regular ‘ole salted butter slathered on top but it takes it to another level with a little bit of honey cinnamon butter or some whipped orange honey butter.

The Bread Baker’s Apprentice-If you’re interested at all in bread baking-check out any of Peter Reinhart’s books. They are gold!