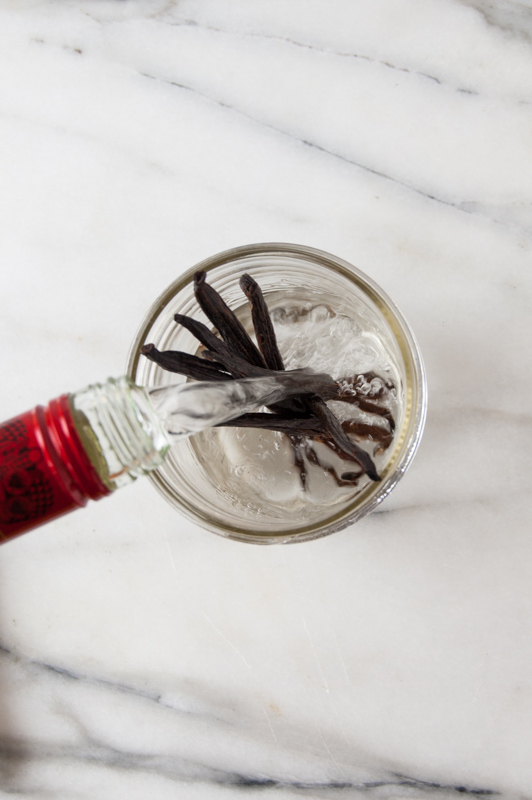 I always see homemade vanilla recipes out during Christmas time.  It makes a wonderful gift.  However, it takes 2-3 months of sitting in your cupboard to be ready, so if you want it for a homemade food gift, you had better jump on it!

That’s the whole list-pretty straightforward. You’ll also want a jar to store it in and possible some fancier jars to gift it.

Where can I buy vanilla beans?

I bought my vanilla beans on Amazon, because where I live, it seems to be hard to find them.  I was very happy with them, they came nice and soft.  I read somewhere that a hard, brittle vanilla bean isn’t fresh and  you shouldn’t use it.

There are 3 types of vanilla beans-Mexican, Madagascar and Tahitian and each of them have their own flavor profiles. I used Tahitian grade B vanilla beans, because that is what amazon sold at what I thought was a reasonable price for vanilla beans.  (It has taken me a long time to justify spending money on vanilla beans.  When they came, I treated them like gold and made everyone smell them).  It’s acceptable to use grade B beans in your vanilla extract because it’s an extract. If you’re going to use vanilla beans in something like say, ice cream, use grade A beans.

I also used Smirnoff vodka.  It was on sale and came in a big bottle.

How to make homemade vanilla extract:

You’ll need about 3 vanilla beans per cup of vodka. Split your vanilla beans down the middle. Place them in a jar. Pour vodka to the top of the jar. Allow to sit in a cool dark place for 2-3 months and you’re done.

Is it cheaper to make your own vanilla extract?

I found it to be cheaper. When I buy vanilla I usually buy McCormick pure vanilla extract (Amazon tells me I’ve purchased it at least 4 times…) and it costs $34 for 16 ounces. I paid $12.99 for my vanilla beans and found the vodka on sale for about $11 which brings me to about $24 and I was able to make 24 ounces of vanilla extract.

What is the best alcohol to make vanilla extract?

I like to use vodka. It’s clear and I personally think that vodka doesn’t add a ton of it’s own flavor into the situation. But pretty much you can use any high proof alcohol (at least 80 proof) like bourbon or rum as well. I would steer clear of flavored varieties and stick with the regular stuff (which actually was harder to find than I anticipated-apparently people really like their flavored vodka…). We’re trying to make vanilla extract, not vanilla vodka.

Can I re-use my vanilla beans after making extract?

I usually discard my vanilla beans after making extract. They’ve been sitting in the vodka for 3 months and they’re wet and gross and in theory have had most of their flavor extracted.

When do I reuse a vanilla bean? After say I’ve scraped out the insides to make a recipe like ice cream sometimes I’ll throw it in a jar of sugar and make vanilla infused sugar.

How to package your homemade vanilla extract:

It’s totally fine to leave your vanilla in whatever jar you made it in. I found the jars in the picture at my local Michaels and I liked them because they had a more narrow mouth (which is easier for pouring into a teaspoon or tablespoon when you’re baking). If I was making it just for me, I might simply funnel it into an old store bought vanilla extract bottle. However, if you’re looking for something fancier, here are some of my ideas: 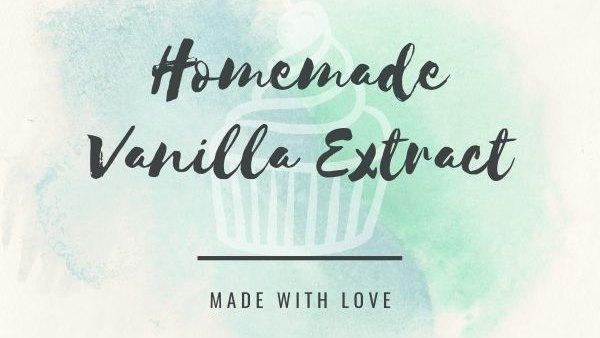 Need a pretty label for your homemade vanilla extract?  Sign up here and I’ll send you my label template for free!