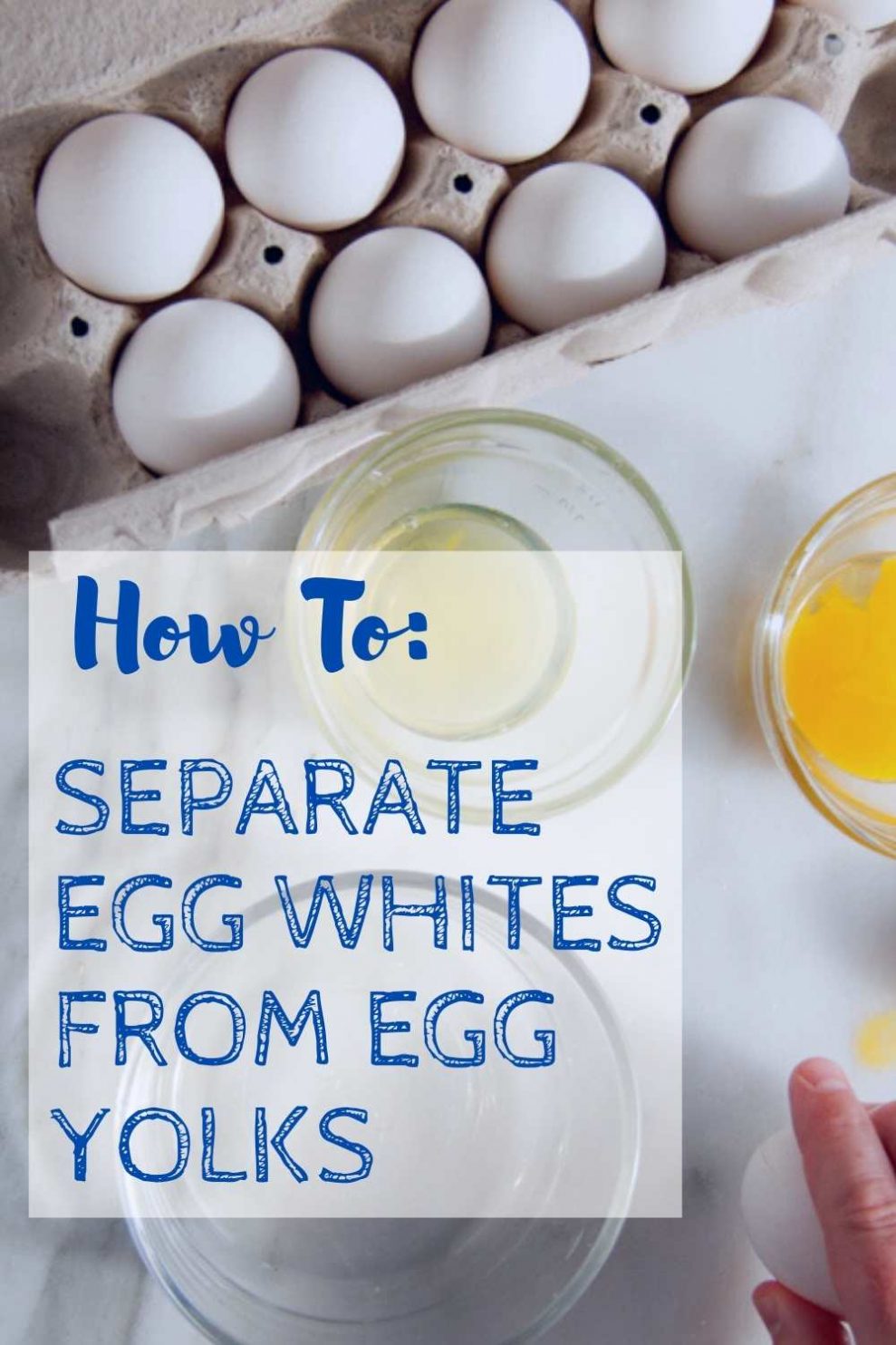 What does “separated eggs” mean?

When a recipe calls for “separated eggs” usually you need the egg white separate from the egg yolk. For example, lemon meringue pie requires several egg yolks for the lemon curd and several egg whites for the meringue. So we have to separate the eggs.

What is the easiest way to separate an egg?

I think it takes a little trial and error to learn to separate eggs and the easiest way to do it is whichever way feels most comfortable to you. I learned by just tossing the egg yolk back and forth between the egg shell (see below) but over time I learned a few other methods that work just as well. However, there is one key thing regardless of the method you choose to separate your eggs:

Have a separate bowl for your egg whites, egg yolks, and for cracking the egg.

Yes, this means dirtying 3 bowls but I can’t tell you how many times I’ve dropped egg yolk into my egg white bowl because I tried separating the egg over the egg white bowl (and angel food cake is not forgiving about egg yolk being in the bowl).

How to use an egg separator:

If your egg yolk “breaks” and you get egg yolk in your egg whites, discard that egg white and try again (you can still use the yolk if you need it). Why do the egg yolks break sometimes? Older eggs. They aren’t bad, simply annoying when you’re trying to separate them.

Need an egg separator in you life? Mine came with my measuring spoons, but I also like this one and this one makes me laugh.

Pro tip: if your egg separator is like mine above, you can balance it on the rim of your bowl (that’s what the extra piece at the top is for) so that your hands are both free to handle your egg.

How to use your hand to separate an egg:

This method is super straightforward, but kinda messy. Mostly because you’re dropping raw egg straight into your hand. I feel like I shouldn’t have to say this, but I bake with a lot of children, so I will: wash your hands before cracking an egg into your hand. Also, wash your hands AFTER separating eggs this way. You can wear some food safe gloves for this if you’re squeamish about raw egg right in your hand. (Note: this is not a method I recommend for separating eggs if you’re baking with kids).

Troubleshooting: if, when you crack the egg into your hand, the egg yolk falls apart, simply dump the whole egg-you can’t separate an egg yolk from the whites when the yolk has fallen apart.

How to use an eggshell to separate an egg:

This is the way I learned how to separate eggs. You don’t need any fancy equipment or to get your hands (too) messy. You simply use the tool that came with the egg-its shell.

How to separate an egg using a bottle:

Crack your egg into your “egg cracking bowl”. Take an empty, clean, plastic water bottle without the cap. Flip it upside down and gently squeeze creating a vacuum in the bottle. Gently press onto the egg yolk and release the squeeze. The yolk should suck up into the bottle. Then squeeze the yolk back out into your “egg yolk bowl.” Dump your remaining egg white into your “egg white bowl.” Repeat as necessary.

To be honest, I wasn’t sure this method would even work. But it worked great. Maybe better than any of the other methods.

Recipes that call for separated eggs:

Now that you know how to separate your eggs, let’s try our new skills!

To make things a little easier in the kitchen, I’ve created a handy printable conversion chart (cause honestly, who can remember how many teaspoons are in a tablespoon?). Sign up below and I’ll send it to you!

Get your handy free kitchen conversion chart by signing up below!