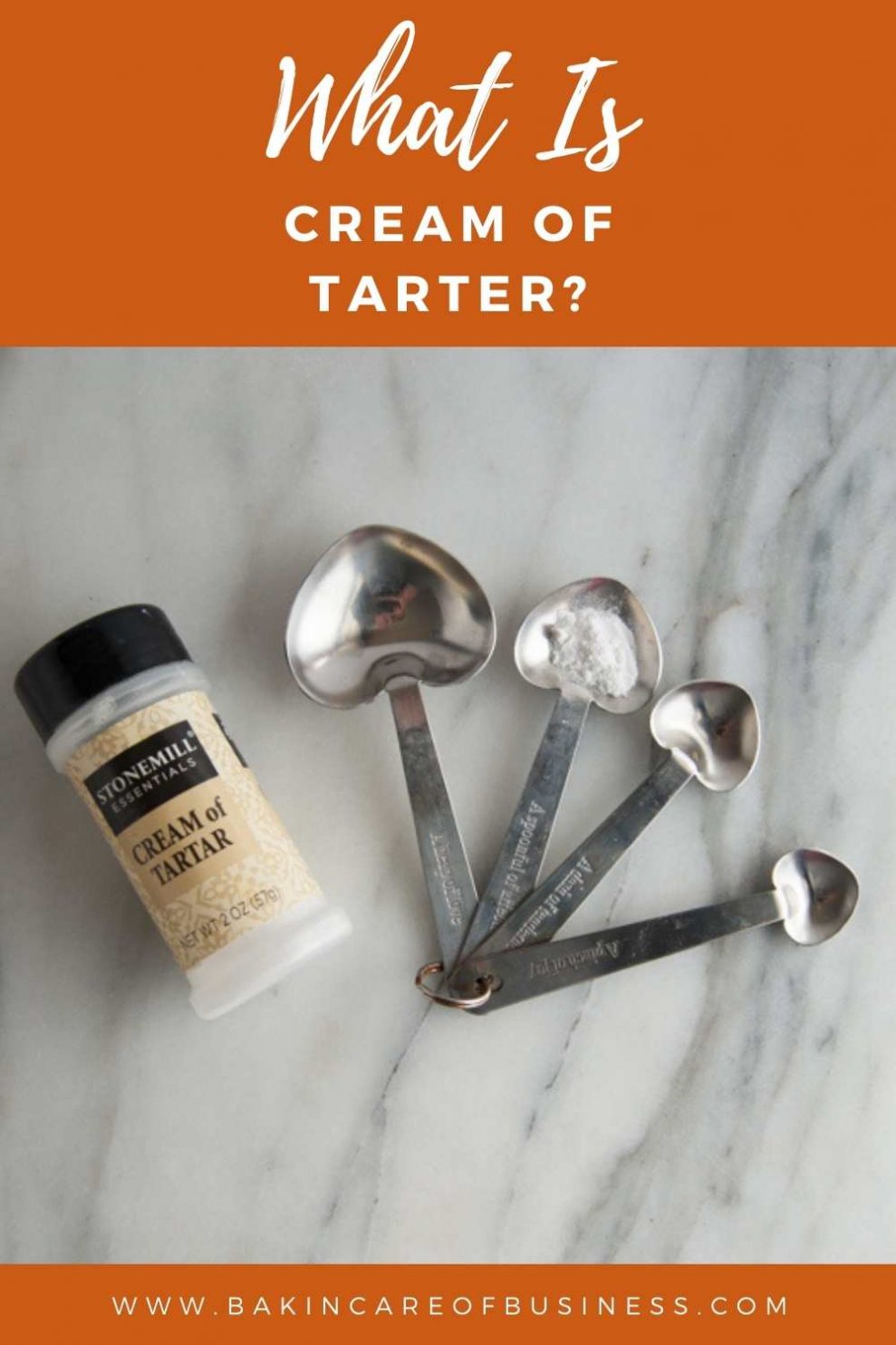 What is cream of tartar? It’s that extra ingredient you see listed for meringue that makes your egg whites fluffy and your snickerdoodles crackly.

What is cream of tartar?

Cream of tarter’s actual name is tartaric acid. It is a white, powdery substance left in wine barrels during the wine making process. Why do we care about white powder leftover from wine making? Because it creates more stable air pockets in our egg whites which helps pump of the volume of our meringue which results in a taller, fluffier angel food cake and meringue for pies. It also helps prevent sugar from crystallizing when making candy and is a key ingredient in our friend baking powder.

How does it help our meringue? Beating egg whites causes the protein in the egg whites to “denature” or come apart. The proteins then realign themselves between the air particles and the water particles (because egg whites are mostly water-fun fact-the egg white is the water source for the developing chick) creating the meringue’s foamy structure. Without the cream of tartar the proteins can pack themselves too tightly together and basically force the water out of it’s bubble. Then your meringue is oozy an weepy.

The cream of tartar keeps the proteins in the egg whites from binding too closely together when they are being whipped so the air bubbles stay where they are supposed to and the water stays where its supposed to. The meringue can be whipped longer when cream of tartar is added so then the air bubbles are smaller and more even throughout so the finished meringue or angel food cake has a nicer texture which leads to a nicer mouthfeel.

How much cream of tartar should you use in your meringue? Typically you want to use about 1/8 teaspoon cream of tartar per egg white, but your recipe will tell you what to use.

Is there a substitute for cream of tartar?

Technically, lemon juice or vinegar will perform the same acidic function in a recipe, however, because you’re adding a liquid to the recipe, you run a higher risk for making your meringue more unstable. Plus, cream of tarter is 100% acid and lemon juice is only 3% and vinegar is, at best, only 5% so you don’t even have as much acid power. It’s one of those things it’s best just to have the real thing.

Is cream of tartar necessary in a recipe?

It a little bit depends on the recipe. Can you make meringue without it? You sure can but since it stabilizes the egg whites, it’s a lot easier to make your meringue if you have it. You run less risk of having it break down during whipping or even later on.

Can you make snickerdoodles without it? Actually, no-cream of tarter is the secret ingredient that gives snickedoodles their characteristic crackly top and tang. They just wouldn’t be the same without it.

Is it the same as baking soda?

Where can I buy cream of tartar?

I have found cream of tarter in the spice aisle of pretty much any grocery store I’ve ever been in the the U.S. And of course, like pretty much everything, you can buy it on Amazon.

Why is it sold in the spice aisle? Because traditionally spice companies make and package it.

Recipes that use cream of tartar:

If you’d like a copy of my FREE baker’s pantry checklist, sign up below and I’ll send it to you. I like to print a copy and keep it inside my pantry so I know what I have and what I need from the store.

Signup and I’ll send you a free checklist with the 12 essential baker’s pantry ingredients plus 10 bonus ingredients!