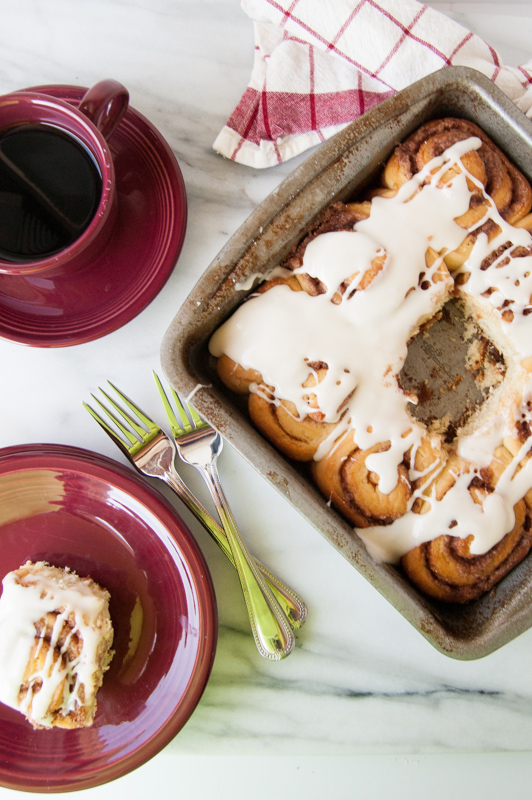 Can you use potato flakes in these cinnamon rolls?

Totally! Simply sub in 1/2 cup potato flakes for the 1 cup mashed potatoes. The cinnamon rolls are just as good! I use this method to make these cinnamon rolls and potato bread all year round.

Can you use all-purpose flour in cinnamon rolls?

What if my cinnamon rolls rise too long?

If they rise too long on the first rise, no problem, punch the dough down, give it a few more kneads and let it rise again for about 40 minutes.

If they rise too long in the pan, it’s a bit trickier. Your best bet at that point is to go ahead and bake them. They might not get as much oven spring but they’ll still taste good.

How do I know when the cinnamon rolls are ready to go into the oven?

When the rolls have grown close to each other and when you gently poke the dough and it leaves a bit of a dent. This should take about 45 minutes, depending on the temperature of your kitchen.

How do I store mashed potato cinnamon rolls?

Cinnamon rolls can be stored at room temperature for 3-4 days in a sealed container. Because they don’t have any preservatives, they will start to become stale after about 4 days and mold after about a week.

To revive a slightly stale cinnamon roll-pop it in the microwave for 20 seconds.

You can also store them in the fridge for a week or so and that will drastically slow down the mold growth.

What kind of frosting should I use?

My mom always made these with a simple frosting of 1 cup powdered sugar, 2 tablespoons milk, and 1 teaspoon vanilla extract. However, regular American buttercream is really nice drizzled on top and cream cheese buttercream is also an excellent choice. I like to drizzle my frosting on when the cinnamon rolls are still warm so that it sort of melts into the cinnamon roll, but waiting until they’re cool is also fine. There is basically no wrong way to frost a cinnamon roll. 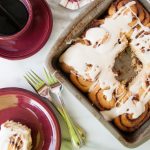 For the Cinnamon Roll Dough

Can use 2/3 cup potato flakes instead of 1 cup mashed potatoes.