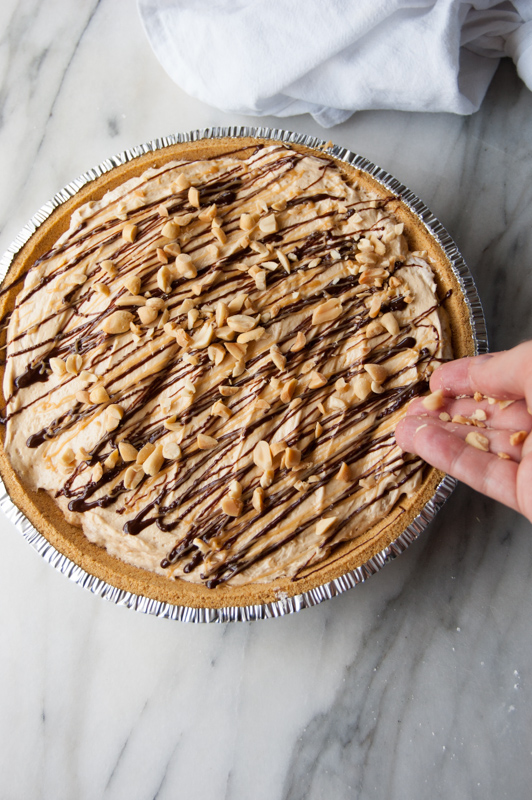 Peanut Butter Pie is the ultimate decadent no-bake peanut butter and chocolate dessert. It only requires about 15 minutes and no oven! The perfect summer treat!

Peanut butter pie is one of my favorite pies. Probably because it only takes about 15 minutes to put together and I don’t have to fight with any pie crust. Or maybe because it tastes like a peanut butter cup, which is basically my favorite candy ever.

What Does “Fold In The Cool Whip” Mean?

Basically, folding means that you take a lighter ingredient, in this case Cool Whip (but it could be egg whites or regular whipping cream, depending on your recipe) and using a rubber spatula, you gently mix it into the heavier ingredients, in this case the peanut butter mixture.

Why do you fold ingredients in? Because using a rubber spatula or spoon helps to keep the air in the Cool Whip instead of deflating it. The strength of a mixture would deflate some of the air and the texture of the pie would change. Even though it might feel like you’re stirring too vigorously, there is no way you would be as tough on the batter as a mixer would be.

Ways to customize your pie top:

Can you freeze peanut butter pie?

Why, yes you can! In fact, my family often eats it as a frozen pie.

To freeze peanut butter pie: make pie according to directions. Cover and place in a freezer safe container.

To eat: you can eat frozen peanut butter pie, the filling takes on an ice cream like flavor/consistency. Otherwise allow to come to room temperature for about 20 minutes, then cut and serve as usual. 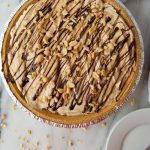 To make things a little easier in the kitchen, I’ve created a handy printable conversion chart (cause honestly, who can remember how many teaspoons are in a tablespoon?). Sign up below and I’ll send it to you!

Get your handy free kitchen conversion chart by signing up below!