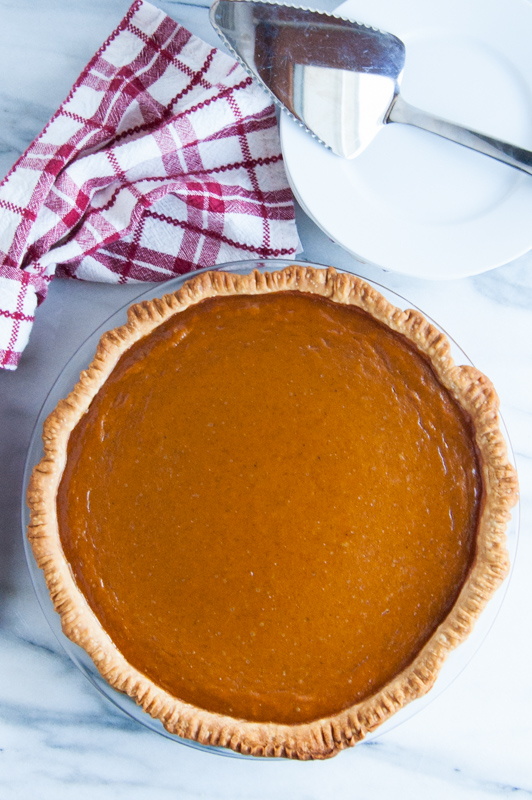 Pumpkin pie is a must have at most Thanksgiving tables. Make your own pie this year with this straightforward recipe requiring only 20 minutes prep.

Pumpkin pie-you either love it or you hate it. Maybe hate is a strong word. I have a friend who always says she doesn’t “care for it” if she doesn’t like something. I “don’t care for” pumpkin pie. Which is basically the polite way of saying I wouldn’t be sad if it fell down the garbage disposal. (It’s a squash pie, people)! I’m definitely on team chocolate pecan pie or peanut butter pie.

That being said, I love multiple people who love pumpkin pie. So I make pumpkin pie. And so, for several years, I have been on the search for the most delicious pumpkin pie that does not take a lot of effort and I have finally come up with a winner.

What kind of pumpkin is used for pie?

Pie pumpkins are not the same as the pumpkins that you carve for Halloween. Those pumpkins are bred to be large, specifically for carving, but not to taste good. You want a pumpkin that is bred to be a pie pumpkin. They are often labeled as sugar pumpkins or pie pumpkins in the store and are sweeter, with smoother insides than a carving pumpkin.

Why cook the pie filling on the stove?

Cooking the pumpkin with the sugar and spices on the stove for a few minutes, reduces the amount of water in pumpkin. It also dissolves the sugar granules completely into the mixture. This combination leads to a smoother finished pie.

How do you keep a pumpkin pie from cracking?

You don’t overcook it. Easier said than done, I know. Pumpkin pie is a custard pie and so it needs to be baked long and slow like a cheesecake. No hotter than 375 degrees, which is hot enough to bake the crust but not so hot as to over-bake the filling. Pull the pie out of the oven when the whole thing moves together (no ripples) but before it doesn’t move at all.

If your pie does crack once it cools, simply cover the crack with pie crust leaves or lots of whipped cream. Nobody will care, I promise.

This recipe calls for evaporated milk, but what the heck is it? Evaporated milk is canned milk where about 60% of the water has been removed. The resulting milk is a little bit thicker and creamier with a significantly longer shelf life than regular milk.

How long is pumpkin pie good for?

Your pie will be good at room temperature for up to 4 days.

How to make pumpkin pie:

*If you are making your own pie crust or using store-bought dough, make sure the edges of your crust are flat, not raised. We cook this pie at a lower temperature than most pie and raised edges will fall apart before they are set. I used a fork and simply pressed the edges of the pie crust. *If you prefer, you can substitute 2 teaspoons pumpkin pie spice for the cinnamon and ginger.

If you are looking for more pie recipes for this Thanksgiving (or just because you love pie) you might want to check out these mini lemon meringue pies or this easy apple tart.

The Pie and Pastry Bible