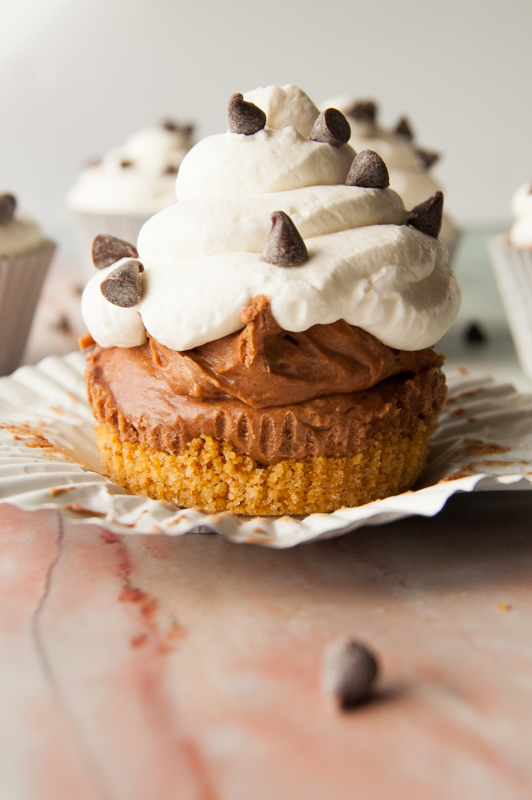 Peanut butter pie is, in my humble opinion, one of the best pies. It’s no-bake, takes only a few minutes to whip up, and tastes like a peanut butter cup. The main drawback? It’s a whole pie. Like, you need a plate and a fork and probably a glass of milk.

Another benefit of mini pies? You can drop one or two off at the doorstep of your favorite people that you may not get to see right now to remind them that you love them.

What Does “Fold In The Whipped Cream” Mean?

Basically, folding means that you take a lighter ingredient, in this case whipped cream (but it could be egg whites or Cool Whip, depending on your recipe) and using a rubber spatula, you gently mix it into the heavier ingredients, in this case the peanut butter mixture.

Why do you fold ingredients in? Because using a rubber spatula or spoon helps to keep the air in the whipped cream instead of deflating it. The strength of a mixture would deflate some of the air and the texture of the pie would change. Even though it might feel like you’re stirring too vigorously, there is no way you would be as tough on the batter as a mixer would be.

The sky’s the limit on what kind of toppings you wan to put on your pies. And since they’re mini pies, everyone really can decorate their own.

Can you freeze them?

Why, yes you can! Peanut butter pies freeze really well.

To freeze mini chocolate peanut butter pies: make pies according to directions but leave off the whipped cream topping (and any candy toppings you want to add). Chill for 1 hour. Wrap each mini pie in plastic wrap and place in a freezer safe container.

To eat: you can eat frozen peanut butter pie, the filling takes on an ice cream like flavor/consistency. Otherwise allow to come to room temperature for about 20 minutes, add your whipped cream and serve as usual. 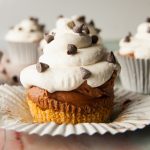 For The Graham Cracker Crust

For The Chocolate Peanut Butter Filling

*You don’t have to bake your Graham cracker crusts, but they do need about 1 hour of time in the fridge before putting the filling in if you don’t. **How to melt chocolate in the microwave ***Skip this step if you’re using Cool Whip in your pie filling. ****Freshly whipped cream doesn’t stay puffy for a super long time so if you’re making these pies several days ahead, save the whipped cream topping for right before serving.