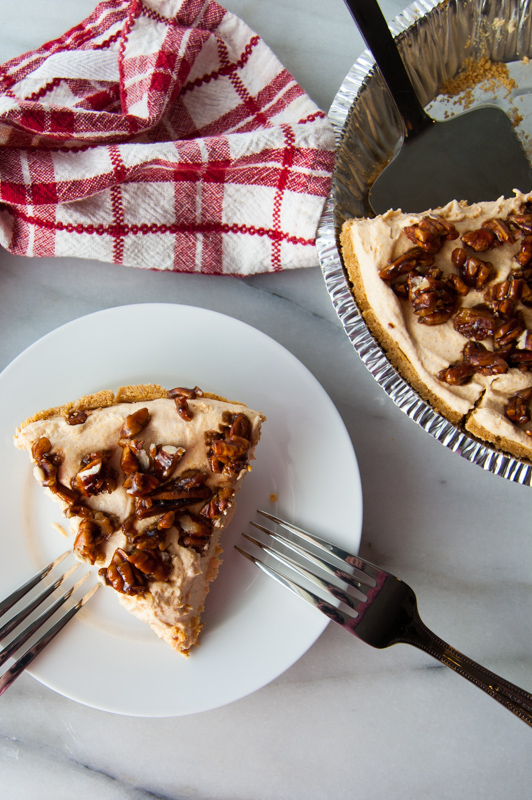 This no-bake pumpkin cream pie can be whipped up in a half an hour. It’s creamy pumpkin filling and candied pecan topping are the perfect combination for those who love pumpkin but not the texture of traditional pumpkin pie.

Let’s face it, traditional pumpkin pie is a little bit fussy. You need a traditional crust and lots of oven time. And oven time is at a premium this time of year. So isn’t your time. No-bake pumpkin cream pie doesn’t take much of your time or your oven space but still gives you that pumpkin-y pie that is special at the holidays.

What kind of pie crust should I use?

I personally like using Graham cracker crust. I can buy one if I’m short on time and baking one up from Graham cracker crumbs isn’t too hard either. But you can really use any crumb crust that you like. Oreo crust would make a fun pumpkin/chocolate combination or if you can find them (they don’t seem to be in every grocery store) Diamond has started making an all nut crust that would be really nice here.

What kind of pumpkin is used for pie?

Pie pumpkins are not the same as the pumpkins that you carve for Halloween. Those pumpkins are bred to be large, specifically for carving, but not to taste good. You want a pumpkin that is bred to be a pie pumpkin. They are often labeled as sugar pumpkins or pie pumpkins in the store and are sweeter, with smoother insides than a carving pumpkin.

We’re going to be using canned pumpkin for this recipe. Why? Well for starters, it’s easy. This pie would take a lot longer than 15 minutes to make if we had to roast our own pumpkin. Second, you get a really consistent product when you buy canned pumpkin.

Canned pumpkin pie filling already has the spices and sugar added. We want to control both the sugar and the spice, so we want simply canned pumpkin. Typically they are side by side in the grocery store, so you’ll have to pay attention.

What can I substitute for pumpkin pie spice?

No pumpkin pie spice? No problem. Use this instead:

Do I really need the candied nuts?

You don’t. I know they add an extra step that involves hot sugar on the stove. The candied nuts add a nice crunchy contrast to the creamy pie, so if you have an extra 10 minutes, they’re totally worth it. You could also dust the top with ground cinnamon or toasted pecans instead.

What do I do with leftover pie filling?

Ok, so maybe you don’t need two pies and you have quite a bit of leftover filling. This pie filling makes an excellent pumpkin fluff dip. Simply scoop it into a pretty bowl and serve it with ginger snaps or Graham crackers and you’ve got an instant snack! 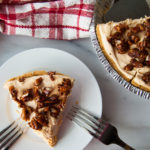 If you don’t want to use Cool Whip, feel free to use 2 cups of whipped cream instead. Divide the recipe in half if you only need one pie.
Print

Adapted from The Perfect Pie