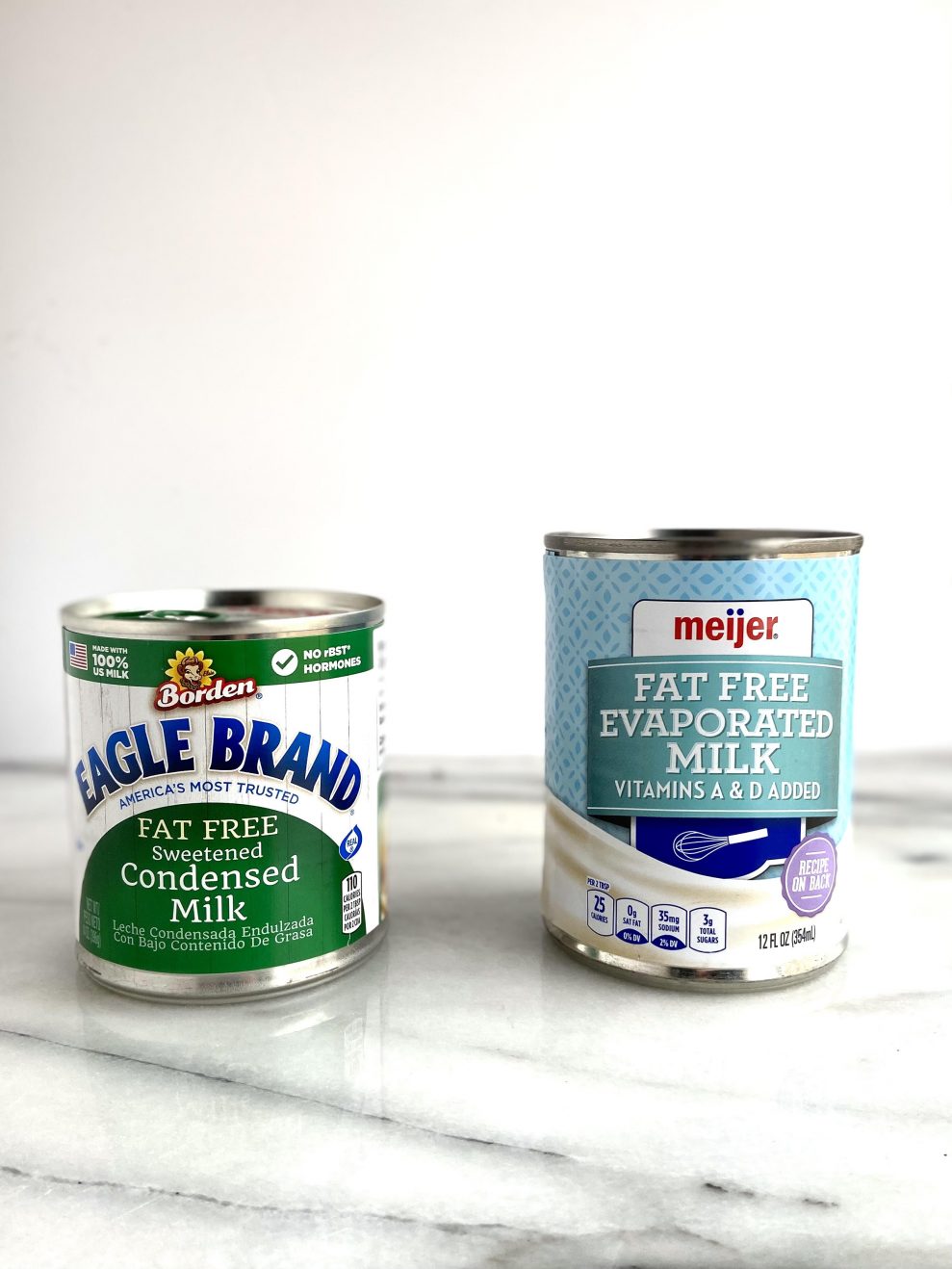 What is the difference between evaporated milk and sweetened condensed milk? Find out the history, recipes that use each, and how to substitute if you don’t have one in your pantry!

Evaporated milk is canned milk where about 60% of the water has been removed. Consequently, evaporated milk is a little bit thicker and creamier with a significantly longer shelf life than regular milk.

Can I drink evaporated milk?

You can, it is perfectly safe to drink although it will have a different consistency and flavor than regular milk.

What’s the difference between evaporated milk and regular milk?

Can I substitute evaporated milk for regular milk?

Recipes that use evaporated milk:

What is sweetened condensed milk?

Sweetened condensed milk is milk where much of the water has been removed (like evaporated milk) AND sugar has been added. It’s thick and slightly more yellow looking and super sweet. Kinda gross to consume straight out of the can, super awesome in certain desserts.

Sweetened condensed milk was actually the first canned milk to be released back in 1856. The idea was to create a milk product that would last longer than just a day or so. (Pasteurization wasn’t even discovered until 1862). The sugar was originally added to inhibit bacterial growth in the milk (kind of like the same reason we add sugar to jam).

Is sweetened condensed milk the same as heavy cream?

No. Basically, heavy cream is all the milk fat skimmed off the top where sweetened condensed milk is regular milk that has had a lot of the water removed and sweetener added to it.

Recipes that use sweetened condensed milk:

I bought the wrong one, can I just interchange them?

Um, no. Using sweetened condensed milk where you just needed evaporated milk will make your dessert way too sweet.

What’s super delightful, is they both come in similarly sized cans and are typically together on the shelf at the store, so this is a super easy mistake to make.

Hopefully you realize you bought the wrong one before you open it, but if you’re like me, you’ll just be staring at an open can of the wrong milk swearing in your head (or sometimes out loud).

If you messed up and bought the wrong one, you can use half and half as a substitute for your evaporated milk or you can make your own by reducing down milk on the stove.

If you’d like a copy of my FREE baker’s pantry checklist, sign up below and I’ll send it to you. I like to print a copy and keep it inside my pantry so I know what I have and what I need from the store.

Signup and I’ll send you a free checklist with the 12 essential baker’s pantry ingredients plus 10 bonus ingredients!